I am married to Gillian with 2 kids, Fionn 7 & Kate 5. I hail from Dublin and hurled for my club Commercials Rathcoole from 6yrs old to 38 years of age.

Over the years my family have been hugely involved in the club and my dad received special achievement award from the president of the GAA in 2007. I have Represented Dublin at all levels from U/16 right up to Senior level.

I now hurl with Kill GAA club in Co. Kildare at intermediate level where I grew up. I played football at under age level there before I chose the “small ball”. Kill GAA club has a very special place in my heart as it was my first taste of GAA and I will always thank them for that. I also coach U/8s in both hurling and football.

Hurling is in my DNA and is a huge part my family’s life. 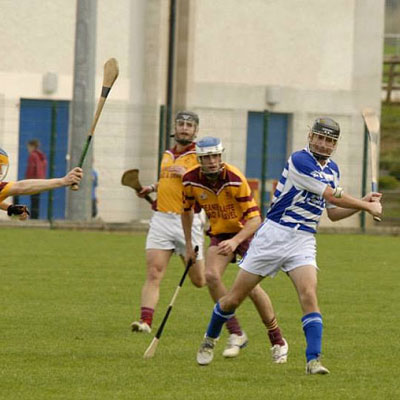 I am well over 30 years playing GAA and I am still a player and heavily involved in GAA activity. Home is Thurles in Tipperary where I grew up and played both hurling and football under age with Durlas og. We were and since are the only team to the double County A final’s in both hurling and football from U12 to U16 inclusive. While in primary and secondary school, I played for Thurles CBS and have silverware to show for my efforts.

I then progressed to play with the local senior clubs. Rahealty Gaa and then on to Thurles Sarsfields where I gave a number of years playing.

In 2003 for work reasons, I moved to Dublin where I gave most of a season playing for Balleyboden St Enda’s. Due to injury it was short lived.

In 2004, I moved to Naas. To date I am playing with Naas GAA where I also am involved in mentoring team’s and a little refereeing over the years.